“I’ve been making these inflatable sculptures for over five years,” Clark told us, recalling the efforts he put into building his business. “Events help it get off its feet,” he elaborated, “I do festivals and concerts.” In order to expand his project’s outreach, Clark has installed his inflatable sculptures at a variety of professional and volunteer community events around the Bay Area. We spoke to him recently about building his business, and the meanings behind his unique creations. 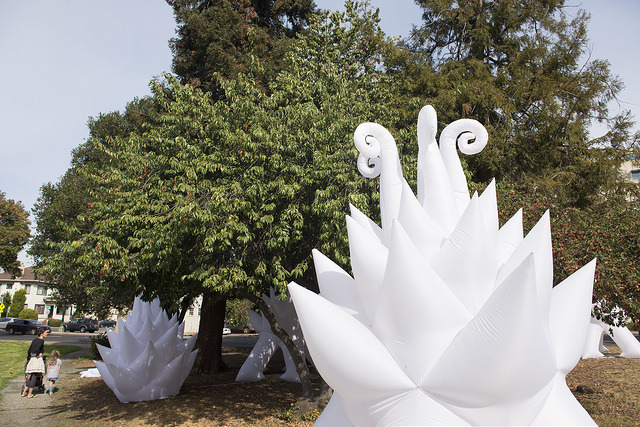 For Clark, Astro Botanicals is a labor of love. In nurturing his passion project, he knew he might sometimes create designs and do installations for events he wasn’t as passionate about in order to fund more creative endeavors. One event he did love, however, was the Bay Area Book Festival—which “promotes literacy,” a “creative environment rewarding imagination and creativity.” These types of incisive and creative environments help nurture local artists, giving them a platform to reach broader audiences while also refining their craft. 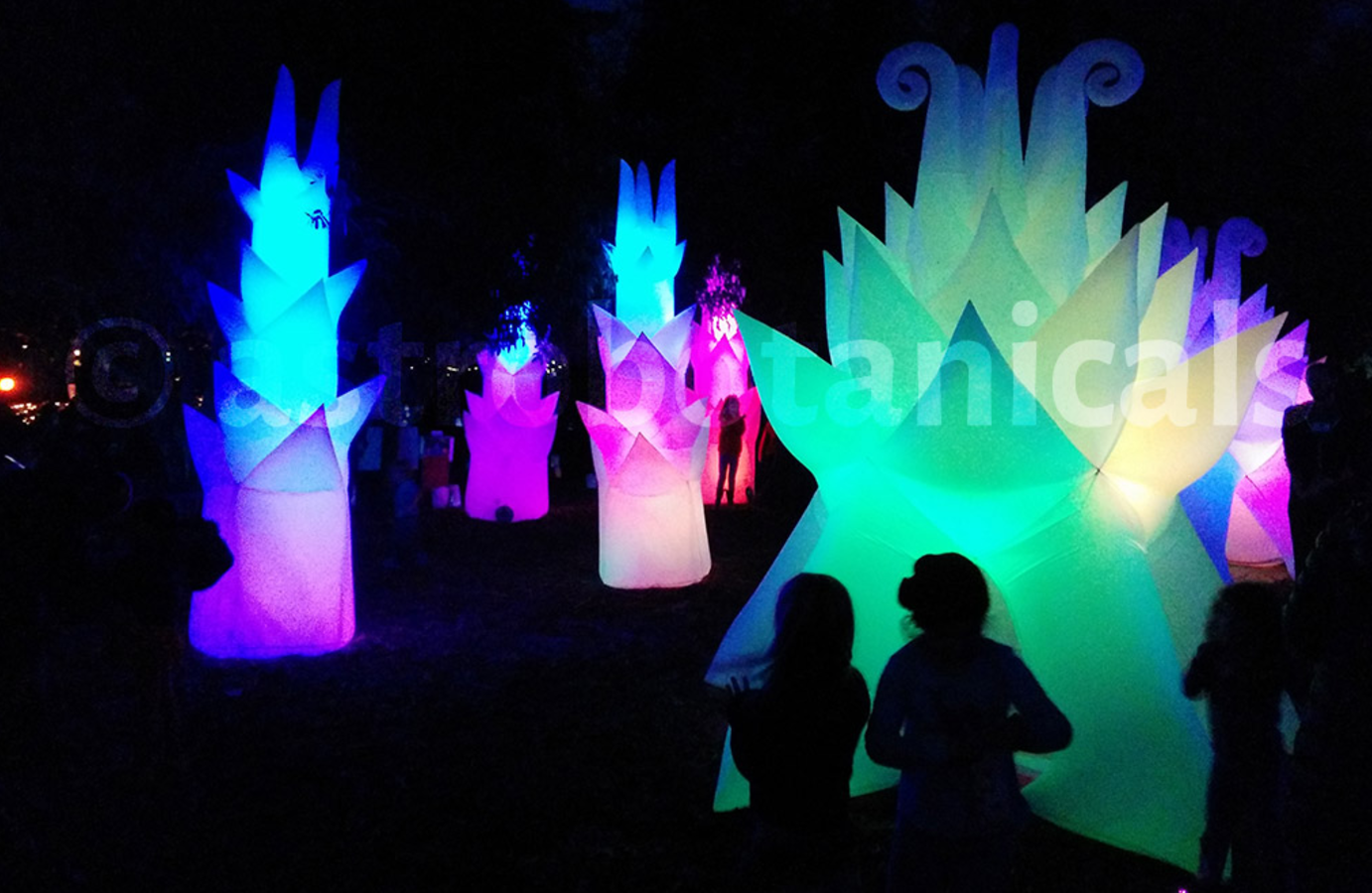 Above: An Astro Botanical forest, captivatingly lit up at a nighttime event. Image courtesy of Stan Clark.

FIGMENT attracts a wide variety of artists and collaborators, spanning every genre, from the literary to the robotic. When Clark attended FIGMENT in 2015, he “set up under the trees”—unveiling his beautiful sculptures for FIGMENT attendees to admire. He brought three sculptures—each about twelve feet tall, and eight feet wide—set up approximately ten to fifteen feet apart.

“I have a lot more sculptures now!” Clark said in a recent phone call. As his website notes, Astro Botanicals are “elegant, inflatable, space plants shaped like classical ornamental flowers.” His inflatable designs are purposefully extra-large, so their multi-colored light displays give off a magical aura. Astro Botanicals currently come in four varieties: Dragon Lotus, Magnolia Starship, Angelic Asparagus, and Singular Asparagus. Clark intends to taking one of his designs to 2017’s FIGMENT, which will again take place in Oakland’s Mosswood Park.

We noted that some of his designs seemed to have an Asian-inspired design flair. “The ‘oriental’ feel is an accidental coincidence,” Clark noted. “I started creating and noticed they emulated traditional designs. My designs represent a relationship to nature.”

Traditional stone sculptures predate civilization itself, often depicting the ominous figures of our historical past, including formidable rulers and fearless societies. To Clark, traditional stone ornaments are a symbol of power and authority; his designs are instead focused on bringing art to a “ground-level”—encouraging interaction between people and nature.

“Younger kids love it, because they love playing hide-and-seek with [the sculptures],” he observed. “There’s an interesting chaos when kids take over.” Astro Botanicals is a phenomenal example of how art can have profound historical links while remaining accessible and enjoyable to all ages and audiences. In fact, the whole project began with Clark sewing creative stuffed animals to give as children's gifts. 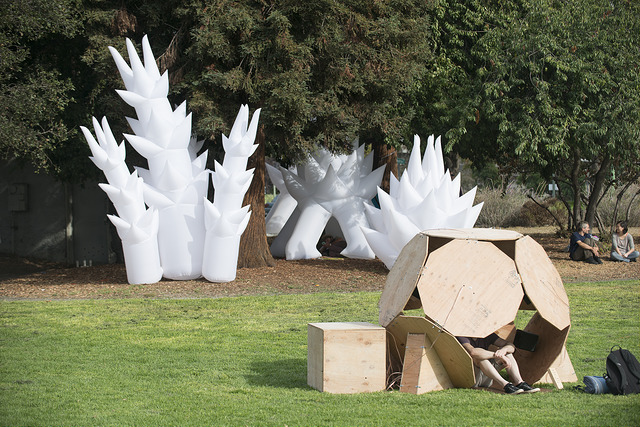 Above: An assortment of Astro Botanicals create an otherworldly environment at FIGMENT Oakland in 2015. (In the foreground: Unrelated, the Noospace project with a participant inside.)

An integral part of Clark’s work is its relationship to psychedelic spirituality. He is deeply interested in the topic, and his other activities include attending local conferences that highlight the science and spirituality of the psychedelic community. The spirituality he embraces is a “deep symbiosis between human and plants,” where some plants represent a deep and positive connection to our consciousness as human beings. This transcendent awareness is “reflected in traditional plant ornaments,” and he says it is a recurring theme and connection among his different botanical designs.

Psychedelic garden art refers “to the origins of nature,” whose imagery parallels ancient shamanic art. There’s a connecting thread of the sacred throughout this type of artwork, from shamanic art whose ideas are still reflected in modern psychedelic culture, as well as traditional stone sculpture, to Clark’s own spiritual designs. While his are inflatables and aren’t carved into stone, their distinct features and symbolism remind the viewer or participant how meaningful it is for art to connect human beings back to nature, and our ancient origins.

For Clark, the garden is the gateway to our origins within nature. Ultimately, art of all forms—including the psychedelic kind—is “an antidote to war.”

“My art’s purpose is to promote positivity and peaceful consciousness,” Clark said.

In a time as contentious, tense, and uncomfortable as the one in which we now live, we at FIGMENT believe that promoting feelings of safety, positivity, and peacefulness within our communities is participatory art’s more urgent goal. We hope you’ll join us.