Something phenomenal happens when technology expands the reaches of an artist’s imagination. Ashley Newton, a San Francisco-based artist, spent her days doing market research in a cubicle before stumbling on that accidental discovery. Newton and her business partner, Sean Stevens, were teaching a class on creating arboretums when one of the students mentioned something revolutionary: a robotic flower. Just like that, the internal gears of a maker began to turn.

“[We] called it Sustainable Magic, because we wanted to create something magical,” Newton smiled. Soon after opening their artistic practice in 2012, Newton and Stevens applied for 2013’s Priceless Art Festival in Belden Town, California, to create radiant mechanical flowers that amaze attendees. The team painstakingly laser-cut the delicate designs. From petals and pistils, Sustainable Magic was born. 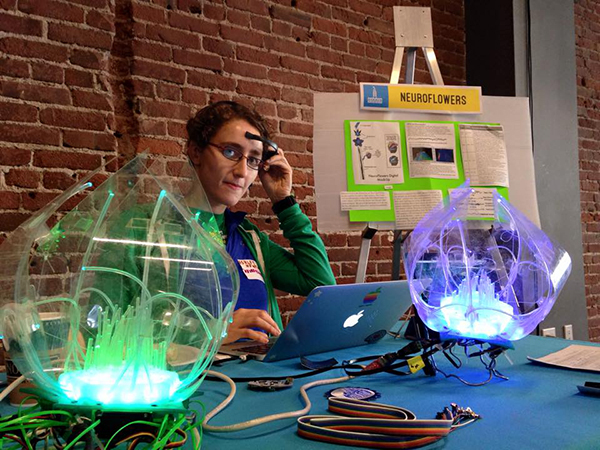 Robotics artist Ashley Newton with some of her creations.

The San Francisco Bay Area’s appreciation and support for the arts piqued Newton’s interest, promising a place for Sustainable Magic to thrive. Though some artists see the tech and art worlds in opposition to each other, Newton explains, “Tech hasn’t drawn away from [our] art, because ours is technological.” In creating Sustainable Magic, she knew they could foster the type of experience that inspires people to think, “what else is possible?”

Laser-cut flowers aren’t the only robotics Newton’s explored. In examining the intersection between technology and nature, the team encountered a revolutionary way to create their art: 3D printing. Sustainable Magic’s flowers transformed as the technology for them developed. Technology doesn’t replace art—rather, it helps it evolve.

3D technology offered bountiful creative possibilities. Enchanted, they felt the technology could help them do more than just light-up a space. Newton knew that 3D could enable her art to come to life, and even interact with people. This led her to the San Francisco Market Street Festival, where winning artworks are installed along the street to encourage people to engage with the city. “I wanted to create an ECG-headset and heart-rate sensors, so the flowers could understand people’s physical state,” Newton explained.

“As you continue to relax, one flower would open, and then another, and then all three.” This is the basis of her Neuroflowers concept: a bouquet of mind-controlled flowers. 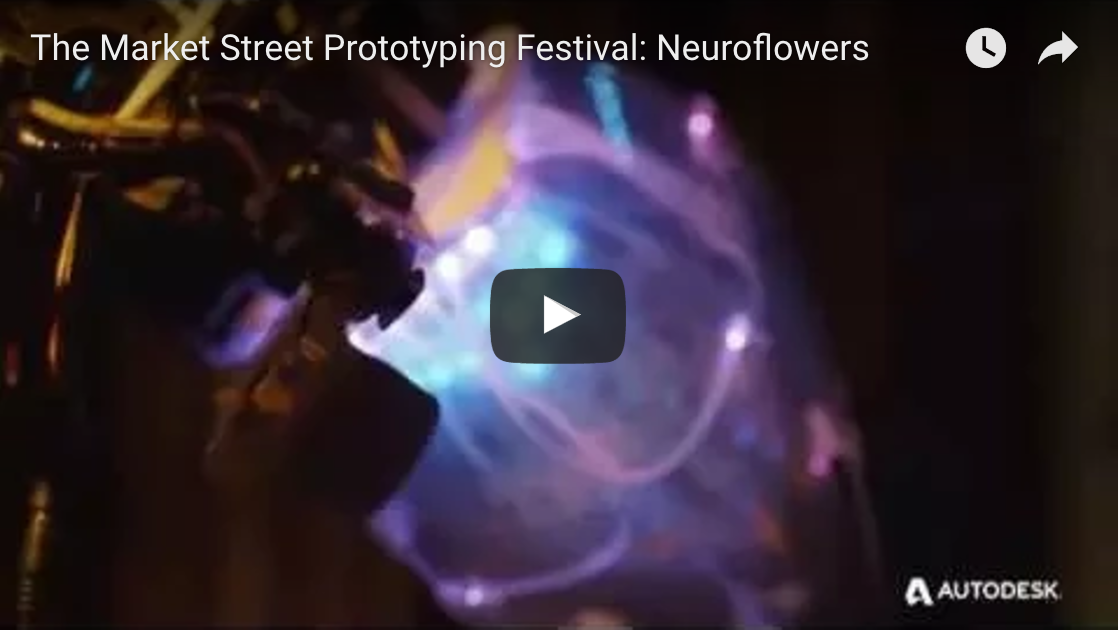 “With our art, people are participants, rather than passive observers,” Newton reflected. “[That’s why] it’s important to bring these flowers to more people, so they can see it is possible: you can learn it and enjoy it, too.” The duo brought their innovative and enchanting designs to events such as the “Bad Ideas Hackathon,” helping technical and non-technical types alike merge skills through rapid problem-solving. Ultimately, bringing robotic art to events shows people if they can imagine it, they can build it.

Laser-cutting and 3D technologies are becoming increasingly accessible to more people. “Our latest laser-cut flowers come with parts you can snap together—like a kit,” Newton said.

Both Stevens and Newton have attended FIGMENT multiple times, inspired to broaden their impact by reaching more appreciators. “In creating Sustainable Magic, we’ve [built] an ecosystem for other artists and makers,” Newton said. Through their workshops, they’re able to teach the craft of laser-cutting technology.

When Newton attended FIGMENT the first time—with only fluorescent materials—she observed visitors seemed mystified and intrigued at the same time. For her second FIGMENT, she brought working robotics, and “[people] seemed to really love it!” As soon as night fell, “people started to really notice the flowers,” dazzled by high-tech beauty.

And like the feeling of FIGMENT after dark, Newton and Stevens wanted to “be a venue for people to dabble in the unknown.” In creating a newfound community of “artists dedicated to the art of robotics,” Sustainable Magic has been able to turn obscure technology into breathtaking beauty. Sometimes, a flower blooms as night falls, turning the wonders of our imagination into a maker’s oasis.